This tutorial explains how to define new calculated members and measures using MDX expressions (or formulas). If those words do not make sense to you, we advise getting to know the main eazyBI concepts and learn how to create reports and then come back to this section again.

MultiDimensional eXpressions (MDX) is a query language for querying and manipulating the multidimensional data stored in OLAP (online analytical processing) data cubes. MDX syntax is similar SQL syntax or to spreadsheet formulas. Below is an example of a very simple MDX query:

MDX was initially developed by Microsoft for its SQL Server analysis products, though it has since become an independent standard. It's been around long enough now that there are many MDX tutorials and references, most notably:

MDX implementations vary, and many MDX documentation resources are specific to certain niche products or standards.

What you should know

Mastering how to write MDX expressions is initially quite difficult. Don't worry, you will get along quite well if you will follow some ground rules. MDX is a language and to use it for calculations it is enough to understand some base words (data types and functions) and how to use a dictionary (list of available functions).

A function is a mathematical or logical action that transforms data and then returns a modified version of data. In other words, some data goes IN, then function transforms them, and another data comes OUT.You can recognize function by the red color of the text and symbols defining the start and end of the function, brackets (), curly brackets {}, dot .For example, function DateDiffDays() calculates how many days are between two given dates. In this function goes IN two dates and comes OUT one number representing a count of days.

A data type is a particular kind of data item, as defined by the values it can take. In MDX you can use the following data types:

Each dimension [ 1 ] contains one or more hierarchies with one or more hierarchy levels [ 2 ], and each hierarchy level contains dimension members. When creating new calculated measures and members, we usually refer to the specific members with which we want the code to work. So we should show the full path on how to find that particular member. One way to identify a member is to start with the name of the dimension and work downwards, specifying the members at each level in the hierarchy [ 3 ] until we reach the required member.

For example, the Time dimension contains three hierarchies: default, Weekly, and Fiscal. Going further down the default hierarchy it has five levels: All Times (default level), year, quarter, month, day [ 2 ]. To represent a specific month of the year, the path to May 2019 would look like this: 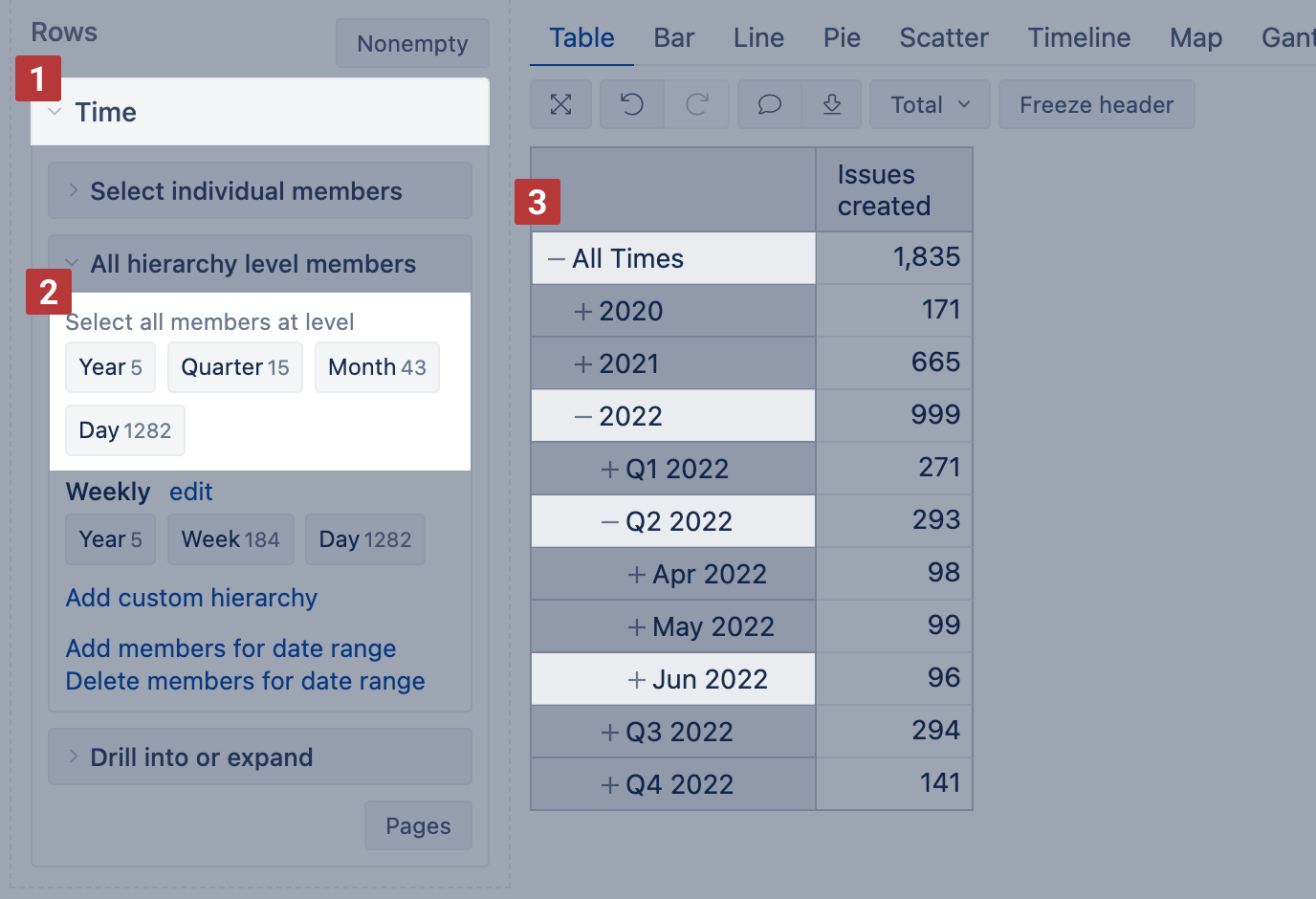 Each dimension typically will have a default All member which can be used to get totals of measures by this dimension. If Customers dimension has a default All member named All Customers, then you can reference it with by its name [Customers].[All Customers] or [Customers].CurrentHierarchy.DefaultMember to get the same result. In Measures, all measures are at the top level, and you can reference them with as [Measures].[Store Sales], [Measures].[Store Cost] etc.

How to define a new calculated member 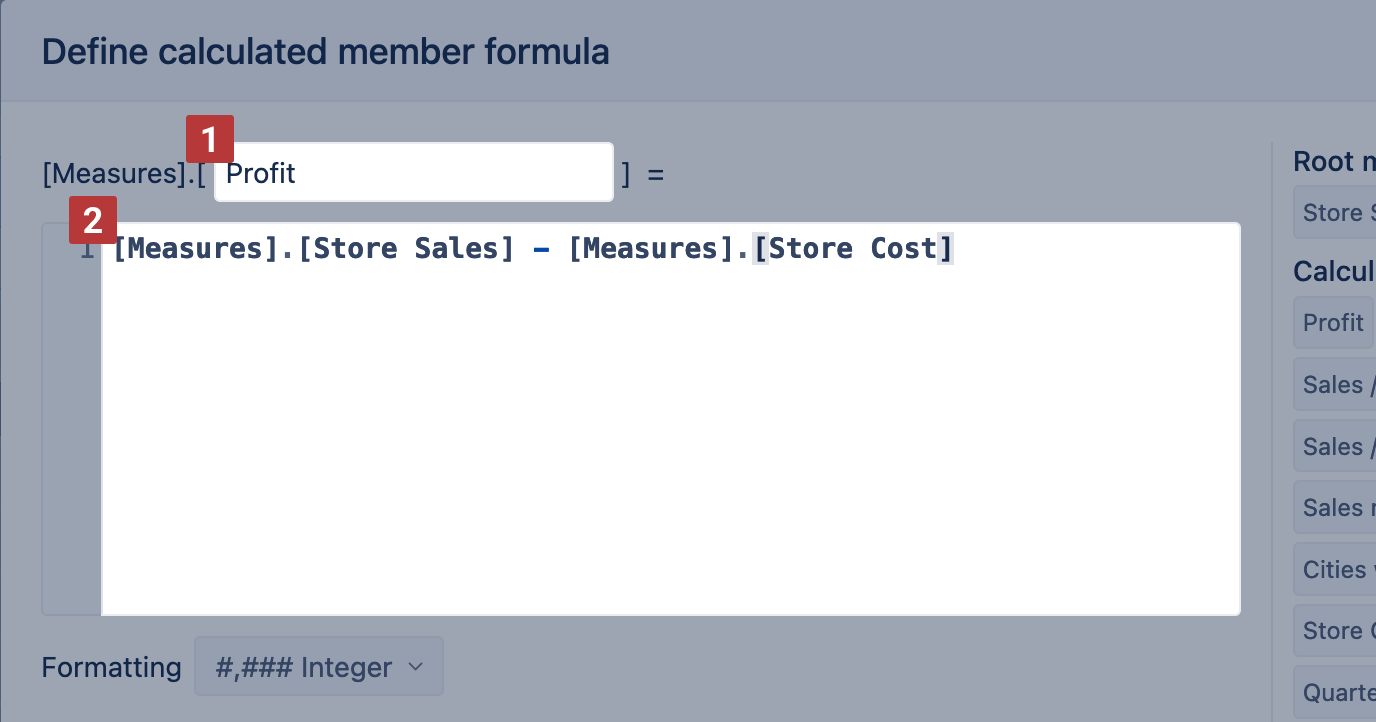 Report specific measures are available in Cloud or starting from the version 6.1 in server products.

The report specific measures are located in a separate section of the Measures dimension. This section is empty once the user starts designing a new report. 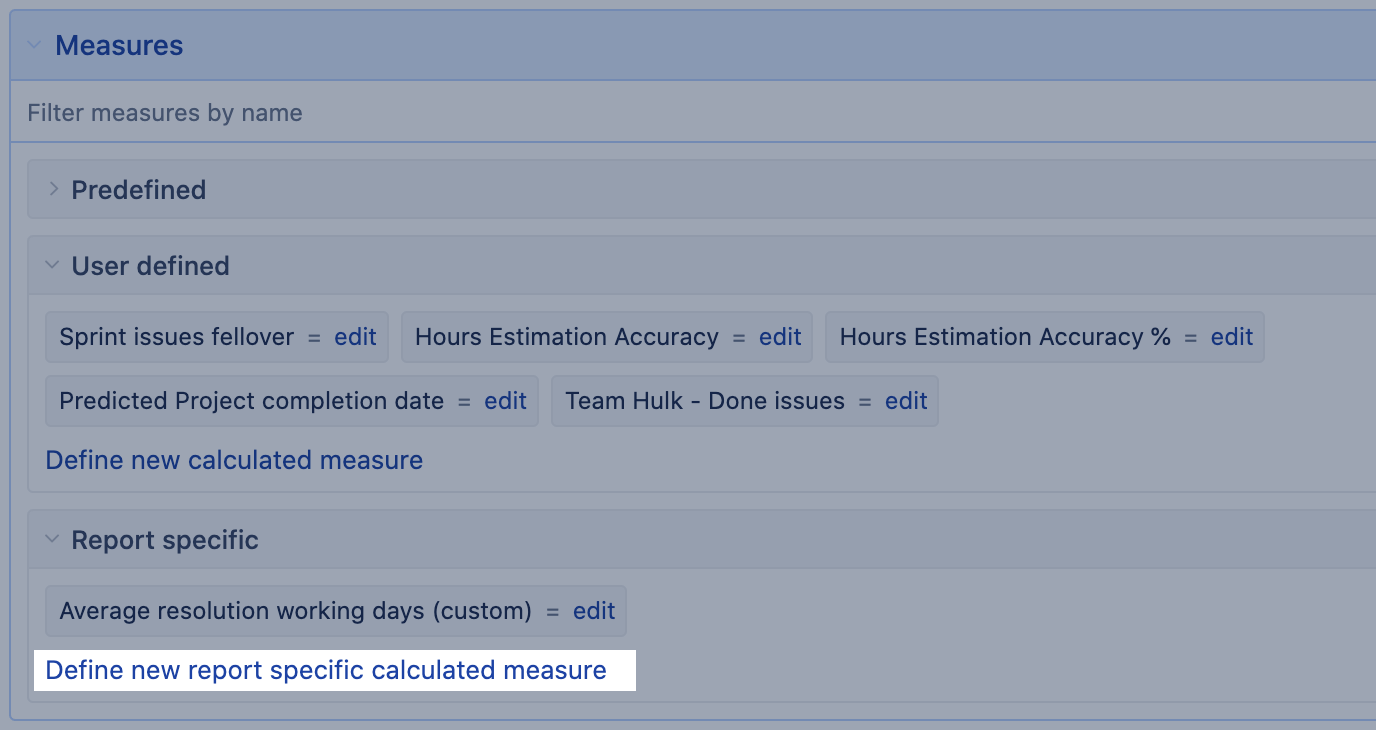 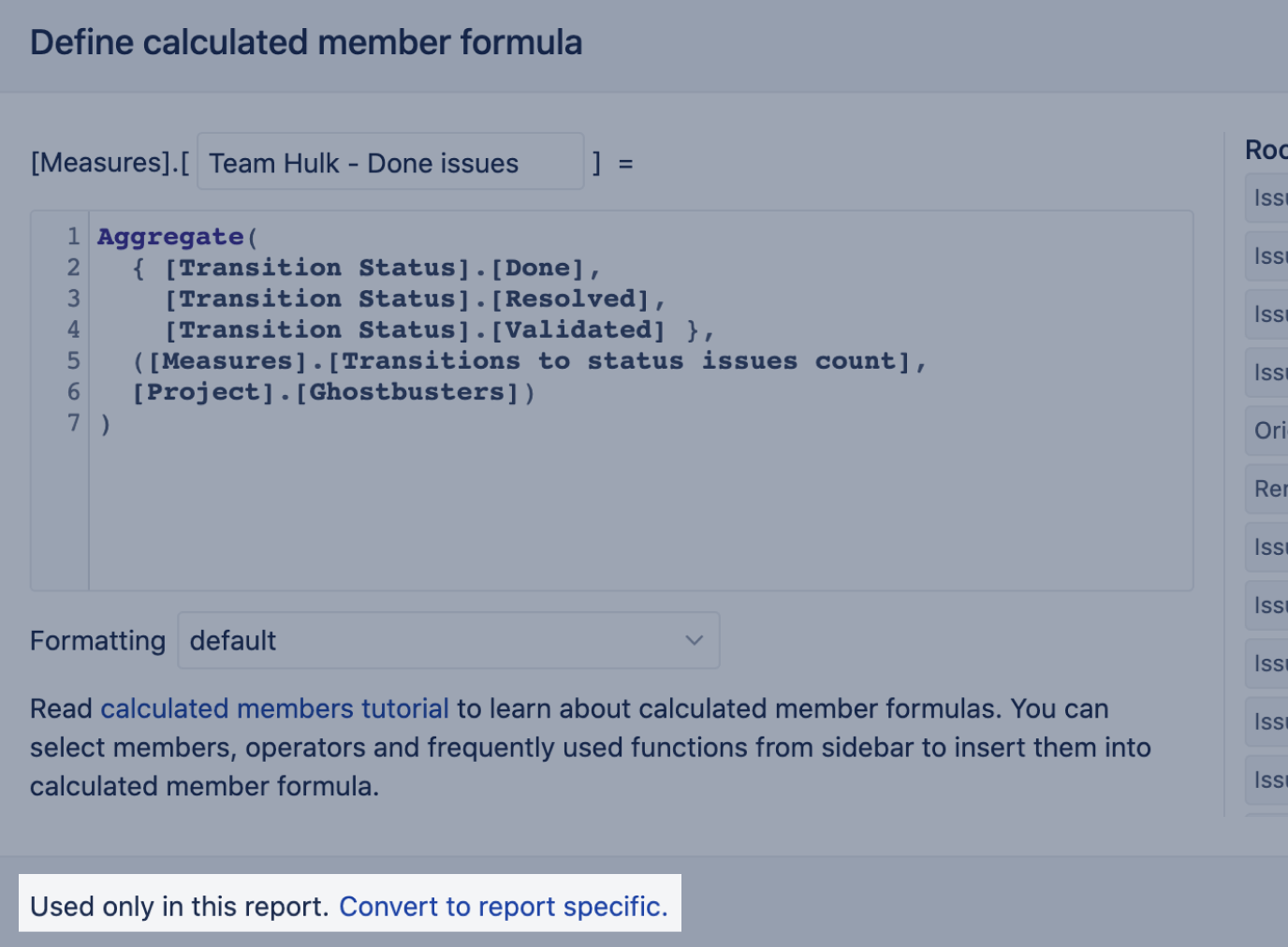 Dimension members have some default properties like .Name and .Key as well as they can have additional custom properties. eazyBI source application import (e.g. from Basecamp, Highrise or Jira) is also importing additional dimension fields from source systems. Note that a property holds information about a particular member and could be anything that describes that member details.

For example, a User dimension member can be a person (user) and the property of each user can be an address (string), age (number), date of birth (date). In reports, properties are displayed only at a particular user level.

To access and retrieve property values, we recommend using MDX function get(). This function will return property value if a member has such property or an empty result if no property is defined for the current dimension level.

To get a list of all available properties and their values for each member, you may use MDX function AllProperties.

Sometimes you might want to return a default value if some measure or function will return an empty value. In these cases, you can use a function CoalesceEmpty(), for example:

How to work with the formula editor

To get a list of available dimensions and Measures, start typing name with square brackets [ (refresh your knowledge on naming conventions). To get a list of available MDX functions, start typing a function name or entre dot . after a member or another function. Formula editor will show you only those MDX function which could be used in the current syntax.

It is possible to write comments in calculation formulas. Use comments either to describe some non-obvious complex calculations or also commenting is valuable during debugging of the calculation formulas. When something is not working as expected then comment all formula lines and leave uncommented just some part of the formula that you would like to debug. You may also mark an area of formula and use shortcut ⌘ / to comment it.

-- annotations.disable_drill_into=true
Do not allow the Drill into action for this calculated member.

-- annotations.disable_drill_across=true
Do not allow the Drill across action for this calculated member.

-- annotations.disable_drill_through=true
Do not allow the Drill-through action for this calculated member.

-- annotations.disable_drill=true
Disable all drill actions for this calculated member.

-- annotations.total=sum
Force the total calculation as a sum of row calculations when the total for rows is selected from toolbars

-- annotations.drill_through_non_empty=false
During drill through issue the calculation will be executed over all issues imported in the account ignoring any report context. It could slow down the drill through issues output significantly!

-- annotations.copy_as_user_defined=true
Enable the option to edit template measures in the recipient account. Changes made in those measures won't be overwritten during data imports. For more details read about template accounts.

When creating a new calculated measure you can choose the format for the output of results.

If not selected, eazyBI would return a default format which sometimes is not correctly identified by eazyBI (for example, if calculation is the result of DateDiffDays() function) 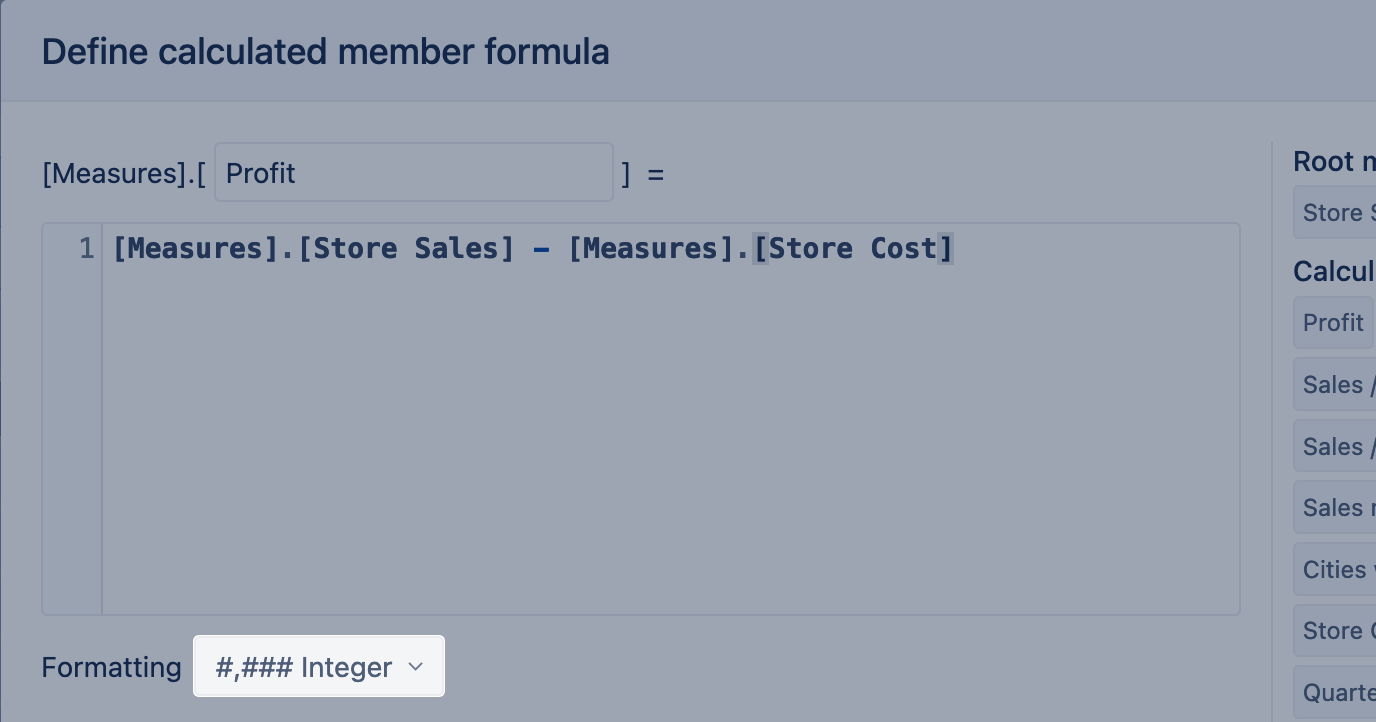 You can choose between the following formats:

You can use the following keyboard shortcuts in the formula editor: